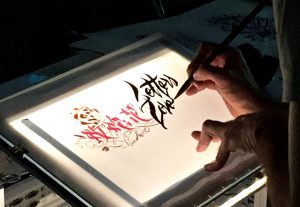 The performance is a networked projection between Berlin and Beijing to celebrate 30th friendship anniversary of Goethe-Institut in China.

In this context, we invited the citizens in Beijing and Berlin to write messages and draw tags to create a translocal dialogue beyond physical borders with the interactive projection performance of DIGITAL CALLIGRAFFITI.

The inhabitants of two cities – Berlin and Beijing – was projecting Calligraffiti messages into Berlin’s urban space and at the same time in Beijing.

The project is initiated by Public Art Lab and curated in cooperation with ‘From Here to Fame Publishing’ with the artists Michael Ang and Hamza Abu Ayyash.

Digital Calligraffiti is co-funded by the Creative Europe programme of the European Union in the framework of the cooperation project Future DiverCities.

The connection of the Beijing artists are networked by the media partner Invasian Magazine.